Ischemic stroke in a general population: Time trends in incidence, case fatality and the impact of risk factors. 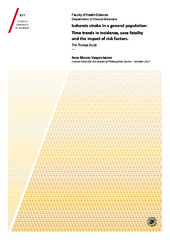 About 80-85% of all strokes are due to reduced blood flow to the brain (ischemic strokes). Lack of knowledge regarding time trends in incidence and case fatality of ischemic stroke in Norway represented a main motivation for this study. Data from the Tromsø Study, following >40,000 attendees from six surveys through 2012, provided an excellent opportunity to reveal time trends of ischemic stroke and assess the potential mechanisms behind these trends in a general population. We found that the overall age- and sex adjusted incidence of ischemic stroke declined with 27% from 1995–2012 in persons aged ≥30 years. The time trends differed by age, with increasing incidence in women aged 30-49 years, a non-significant rising trend among men 30–49 years, and declining incidence in women aged 50–74 and men aged 65–74 years. In men 50–64 and among those ≥75 years, the ischemic stroke incidence in 2012 did not differ from the incidence two decades earlier. The age-adjusted 30-days case fatality decreased in men aged 30-84 years but not in women or in attendees ≥85 years. Overall, the combined changes in seven cardiovascular risk factors (systolic blood pressure, total cholesterol, HDL, daily smoking, physical activity, diabetes and body mass index) accounted for 57% (95% CI: 28–100) of the decrease in ischemic stroke incidence from 1995–2012, with decrease in average blood pressure and decline in smoking prevalence as the most important contributors. The increasing diabetes prevalence contributed negatively to the decline in ischemic stroke risk. Using the parametric g-formula, we could hypothetically apply joint interventions and assess the subsequent stroke risk. We found that a feasible joint hypothetical intervention on systolic blood pressure, total cholesterol, weight, physical activity, smoking and alcohol intake would reduce the 18-year stroke risk in our population by 19% (1995–2012). A combination of more intensive interventions would reduce the estimated 18-years stroke risk by 55%. Blood pressure reduction and quitting smoking significantly reduced the risk when applied separately.