International perception of lung sounds: a comparison of classification across some European borders 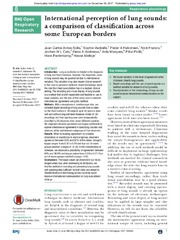 Introduction: Lung auscultation is helpful in the diagnosis of lung and heart diseases; however, the diagnostic value of lung sounds may be questioned due to interobserver variation. This situation may also impair clinical research in this area to generate evidence-based knowledge about the role that chest auscultation has in a modern clinical setting. The recording and visual display of lung sounds is a method that is both repeatable and feasible to use in large samples, and the aim of this study was to evaluate interobserver agreement using this method.
Methods: With a microphone in a stethoscope tube, we collected digital recordings of lung sounds from six sites on the chest surface in 20 subjects aged 40 years or older with and without lung and heart diseases. A total of 120 recordings and their spectrograms were independently classified by 28 observers from seven different countries. We employed absolute agreement and kappa coefficients to explore interobserver agreement in classifying crackles and wheezes within and between subgroups of four observers.
Results: When evaluating agreement on crackles (inspiratory or expiratory) in each subgroup, observers agreed on between 65% and 87% of the cases. Conger’s kappa ranged from 0.20 to 0.58 and four out of seven groups reached a kappa of ≥0.49. In the classification of wheezes, we observed a probability of agreement between 69% and 99.6% and kappa values from 0.09 to 0.97. Four out of seven groups reached a kappa ≥0.62.
Conclusions: The kappa values we observed in our study ranged widely but, when addressing its limitations, we find the method of recording and presenting lung sounds with spectrograms sufficient for both clinic and research. Standardisation of terminology across countries would improve international communication on lung auscultation findings.