Order and structure in embedded clauses in Northern Norwegian 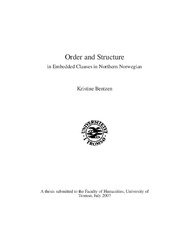 The first part of the dissertation (chs. 1-3) explores the verb placement patterns found in embedded clauses in Northern Norwegian (NN) in more detail. I discuss both patterns where verbs follow all adverbs (ch. 1), and patterns where verbs intervene between or precede adverbs (ch. 2). NN verb movement in embedded clauses also affects the distribution of subjects in various ways, and this is addressed in ch. 3.

In the second part of the dissertation (chs. 4-6) the NN verb movement patterns are discussed in a broader perspective. Chs. 4-5 (joint with Gunnar Hrafn Hrafnbjargarson, Thorbjörg Hróarsdóttir, and Anna-Lena Wiklund) address NN verb movement in a cross-Scandinavian context. Ch. 4 compares the verb movement in NN and Icelandic non-V2 clauses, and argues that the two differ in several respects. Ch. 5 concerns embedded V2 in Norwegian, Swedish, Icelandic, and Faroese, and suggests that these languages display the same restrictions with respect to this phenomenon. Finally, ch. 6 (joint with Marit Westergaard) deals with the acquisition of verb placement in Norwegian embedded clauses, where children are found to overgeneralise verb movement for an extended period of time.