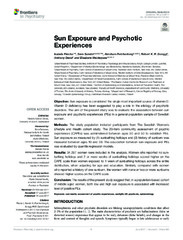 Objective:
Sun exposure is considered the single most important source of vitamin D. Vitamin D deficiency has been suggested to play a role in the etiology of psychotic disorders. The aim of the present study was to evaluate the association between sun exposure and psychotic experiences (PEs) in a general population sample of Swedish women.
Methods:
The study population included participants from The Swedish Women’s Lifestyle and Health cohort study. The 20-item community assessment of psychic experiences (CAPEs) was administered between ages 30 and 50 to establish PEs. Sun exposure as measured by (1) sunbathing holidays and (2) history of sunburn was measured between ages 10 and 39. The association between sun exposure and PEs was evaluated by quantile regression models.
Results:
34,297 women were included in the analysis. Women who reported no sunbathing holidays and 2 or more weeks of sunbathing holidays scored higher on the CAPE scale than women exposed to 1 week of sunbathing holidays across the entire distribution, when adjusting for age and education. Similarly, compared with women who reported a history of one sunburn, the women with none or two or more sunburns showed higher scores on the CAPE scale.
Conclusion:
The results of the present study suggest that, in a population-based cohort of middle aged women, both low and high sun exposure is associated with increased level of positive PEs.