Knowledge about human papillomavirus and prevention of cervical cancer among women of Arkhangelsk, Northwest Russia 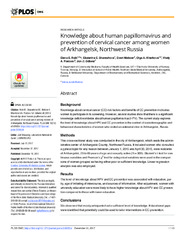 Background - Knowledge about cervical cancer (CC) risk factors and benefits of CC prevention motivates women to participate in its screening. However, several studies show that there is a significant knowledge deficit worldwide about human papillomavirus (HPV). The current study explores the level of knowledge about HPV and CC prevention in the context of sociodemographic and behavioral characteristics of women who visited an antenatal clinic in Arkhangelsk, Russia.

Methods - This cross-sectional study was conducted in the city of Arkhangelsk, which seats the administrative center of Arkhangelsk County, Northwest Russia. It included women who consulted a gynecologist for any reason between January 1, 2015 and April 30, 2015, were residents of Arkhangelsk, 25 to 65 years of age and sexually active (N = 300). Student’s t-test for continuous variables and Pearson’s χ2 test for categorical variables were used in the comparisons of women grouped as having either poor or sufficient knowledge. Linear regression analysis was also employed.

Conclusions - We observed that most participants had a sufficient level of knowledge. Educational gaps were identified that potentially could be used to tailor interventions in CC prevention.