The effect of referral templates on out-patient quality of care in a hospital setting: a cluster randomized controlled trial 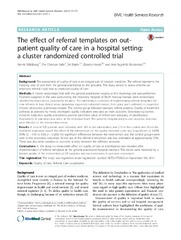 Background - The assessment of quality of care is an integral part of modern medicine. The referral represents the handing over of care from the general practitioner to the specialist. This study aimed to assess whether an improved referral could lead to improved quality of care.

Conclusions - In this study no measurable effect on quality of care or prioritization was revealed after implementation of referral templates at the general practitioner/hospital interface. The results were hindered by a limited uptake of the intervention at GP surgeries and inconsistencies in outcome assessment.