Blood pressure and age-related GFR decline in the general population 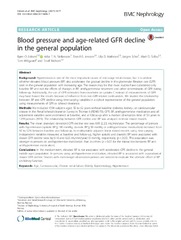 Background:
Hypertension is one of the most important causes of end-stage renal disease, but it is unclear whether elevated blood pressure (BP) also accelerates the gradual decline in the glomerular filtration rate (GFR) seen in the general population with increasing age. The reason may be that most studies have considered only baseline BP and not the effects of changes in BP, antihypertensive treatment and other determinants of GFR during follow-up. Additionally, the use of GFR estimated from creatinine or cystatin C instead of measurements of GFR may have biased the results because of influence from non-GFR related confounders. We studied the relationship between BP and GFR decline using time-varying variables in a cohort representative of the general population using measurements of GFR as iohexol clearance.
Methods:
We included 1594 subjects aged 50 to 62 years without baseline diabetes, kidney-, or cardiovascular disease in the Renal Iohexol-clearance Survey in Tromsø 6 (RENIS-T6). GFR, BP, antihypertensive medication and all adjustment variables were ascertained at baseline, and at follow-up after a median observation time of 5.6 years in 1299 persons (81%). The relationship between GFR decline and BP was analyzed in linear mixed models.
Results:
The mean (standard deviation) GFR decline rate was 0.95 (2.23) mL/min/year. The percentage of persons with hypertension (systolic BP ≥ 140 mmHg, diastolic BP ≥ 90 mmHg or antihypertensive medication) increased from 42 to 52% between baseline and follow-up. In multivariable adjusted linear mixed models using time-varying independent variables measured at baseline and follow-up, higher systolic and diastolic BP were associated with slower GFR decline rates by 0.10 and 0.20 mL/min/year/10 mmHg, respectively (p < 0.05). The association was stronger in persons on antihypertensive medication than in others (p < 0.05 for the interaction between BP and antihypertensive medication).
Conclusions:
In the medium-term, elevated BP is not associated with accelerated GFR decline in the general middle-aged population. In persons using antihypertensive medication, elevated BP is associated with a paradoxical slower GFR decline. Studies with even longer observation periods are needed to evaluate the ultimate effect of BP on kidney function.