Study protocol: the Labor Progression Study, LAPS - does the use of a dynamic progression guideline in labor reduce the rate of intrapartum cesarean sections in nulliparous women? A multicenter, cluster randomized trial in Norway. 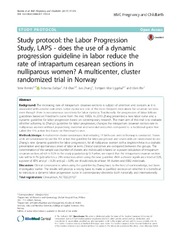 Background:
The increasing rate of intrapartum cesarean sections is subject of attention and concern as it is associated with adverse outcomes. Labor dystocia is one of the most frequent indications for cesarean sections even though there is no consensus on criteria for labor dystocia. Traditionally the progression of labor follows guidelines based on Friedman’s curve from the mid 1950s. In 2010 Zhang presented a new labor curve and a dynamic guideline for labor progression based on contemporary research. The main aim of this trial is to evaluate whether adhering to Zhang’s guideline for labor progression, changes the intrapartum cesarean section rate in nulliparous women without jeopardising maternal and neonatal outcomes compared to a traditional guide line called the 4-h action line based on Friedman’s curve.
Methods/design:
A multicenter cluster randomized trial including 14 birth care units in Norway is conducted. Seven units are randomized to use the 4-h action line guideline for labor progression and seven units are randomized to use Zhang’s new dynamic guideline for labor progression, for all nulliparous women with a singleton fetus in a cephalic presentation and spontaneous onset of labor at term. Clinical outcomes are compared between the groups. The determination of the sample size (number of clusters and individuals) is based on a power calculation of intrapartum cesarean section, which is 9.2% in the study population (p1). Further, we expect that the intrapartum cesarean section rate will be 6.7% (p2) which is a 25% reduction, when using the new guideline. With a chosen significance level of 0.05, a power of 80% and p1 = 9.2% and p2 = 6.9%, we should include at least 14 clusters and 6582 individuals.
Discussion:
Clinical consequences when using the guideline by Zhang have, to the best of our knowledge, not been investigated earlier. The results will provide a strong basis to make a qualified decision on whether it is beneficial to introduce a dynamic labor progression curve in contemporary obstetrics both nationally and internationally.