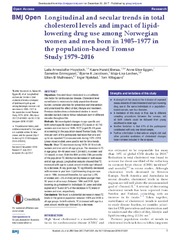 Objectives:
Elevated blood cholesterol is a modifiable risk factor for cardiovascular disease. Cholesterol level surveillance is necessary to study population disease burden, consider priorities for prevention and intervention and understand the effect of diet, lifestyle and treatment. Previous studies show a cholesterol decline in recent decades but lack data to follow individuals born in different decades throughout life.
Methods:
We investigated changes in age-specific and birth cohort-specific total cholesterol (TC) levels in 43 710 women and men born in 1905–1977 (aged 20–95 years at screening) in the population-based Tromsø Study. Fiftynine per cent of the participants had more than one and up to six repeated TC measurements during 1979–2016. Linear mixed models were used to test for time trends. Results Mean TC decreased during 1979–2016 in both women and men and in all age groups. The decrease in TC in age group 40–49 years was 1.2mmol/L in women and 1.0mmol/L in men. Both the 80th and the 20th percentile of the population TC distribution decreased in both sexes and all age groups. Longitudinal analysis showed that TC increased with age to a peak around middle age followed by a decrease. At any given age, TC significantly decreased with increase in year born. Lipid-lowering drug use was rare in 1994, increased thereafter, but was low (<3% in women and <5% in men) among those younger than 50 years in all surveys. Between 1994 and 2016, lipidlowering drug treatment in individuals 50 years and older explained 21% and 28% of the decrease in TC levels in women and men, respectively.
Conclusions:
We found a substantial decrease in mean TC levels in the general population between 1979 and 2016 in all age groups. In birth cohorts, TC increased with age to a peak around middle age followed by a decrease.