Association of occasional smoking with total mortality in the population-based Tromsø study, 2001-2015 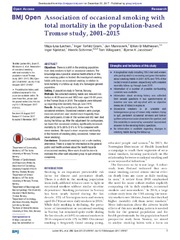 Objectives:
There is a shift in the smoking population from daily smokers to light or occasional smokers. The knowledge about possible adverse health effects of this new smoking pattern is limited. We investigated smoking habits with focus on occasional smoking in relation to total mortality in a follow-up study of a Norwegian general population.
Setting:
A population study in Tromsø, Norway.
Methods:
We collected smoking habits and relevant risk factors in 4020 women and 3033 men aged 30–89 years in the Tromsø Study in 2001. The subjects were followed up regarding total mortality through June 2015.
Results:
Among the participants, there were 7% occasional smokers. Occasional smokers were younger, more educated and used alcohol more frequently than other participants. A total of 766 women and 882 men died during the follow-up. After the adjustment for confounders, we found that occasional smoking significantly increased mortality by 38% (95% CI 8% to 76%) compared with never smokers. We report a dose–response relationship in the hazards of smoking (daily, occasional, former and never smoking).
Conclusions:
Occasional smoking is not a safe smoking alternative. There is a need for information to the general public and health workers about the health hazards of occasional smoking. More work should be done to motivate this often well-educated group to quit smoking completely.