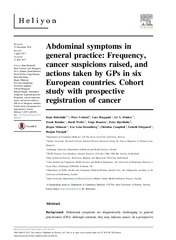 Methods
Over a 10-day period, 493 GPs in Norway, Denmark, Sweden, Belgium, the Netherlands, and Scotland, recorded consecutive consultations: sex, date of birth and any specified abdominal symptoms. For patients with abdominal symptoms, additional data on non-specific symptoms, GPs’ diagnostic suspicion, and features of the consultation were noted. Data on all cancer diagnoses among all included patients were requested from the GPs eight months later.