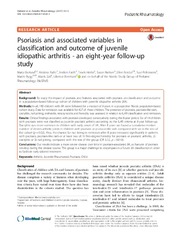 Background
To study the impact of psoriasis and features associated with psoriasis on classification and outcome in a population-based follow-up cohort of children with juvenile idiopathic arthritis (JIA).

Methods
In all, 440 children with JIA were followed for a median of 8 years in a prospective Nordic population-based cohort study. Data for remission was available for 427 of these children. The presence of psoriasis, psoriasis-like rash, dactylitis, nail pitting, enthesitis, tenosynovitis and heredity was assessed in relation to ILAR classification and remission.

Results
Clinical findings associated with psoriasis developed consecutively during the 8-year period. Six of 14 children with psoriasis were not classified as juvenile psoriatic arthritis according to the ILAR criteria at 8 year follow-up. Dactylitis was more common in children with early onset of JIA. After 8 years we found a cumulative median number of eleven arthritic joints in children with psoriasis or psoriasis-like rash compared with six in the rest of the cohort (p = 0.02). Also, the chance for not being in remission after 8 years increased significantly in patients with psoriasis, psoriasis-like rash or at least two of: 1) first-degree heredity for psoriasis or psoriatic arthritis, 2) dactylitis or 3) nail pitting, compared with the rest of the group (OR 3.32, p = 0.010).

Conclusions
Our results indicate a more severe disease over time in psoriasis-associated JIA, as features of psoriasis develop during the disease course. This group is a major challenge to encompass in a future JIA classification in order to facilitate early tailored treatment.