Azithromycin versus placebo for the treatment of HIV-associated chronic lung disease in children and adolescents (BREATHE trial): study protocol for a randomised controlled trial 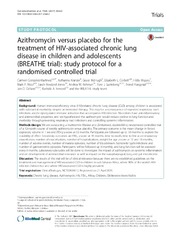 Background
Human immunodeficiency virus (HIV)-related chronic lung disease (CLD) among children is associated with substantial morbidity, despite antiretroviral therapy. This may be a consequence of repeated respiratory tract infections and/or dysregulated immune activation that accompanies HIV infection. Macrolides have anti-inflammatory and antimicrobial properties, and we hypothesised that azithromycin would reduce decline in lung function and morbidity through preventing respiratory tract infections and controlling systemic inflammation.

Methods/design
We are conducting a multicentre (Malawi and Zimbabwe), double-blind, randomised controlled trial of a 12-month course of weekly azithromycin versus placebo. The primary outcome is the mean change in forced expiratory volume in 1 second (FEV1) z-score at 12 months. Participants are followed up to 18 months to explore the durability of effect. Secondary outcomes are FEV1 z-score at 18 months, time to death, time to first acute respiratory exacerbation, number of exacerbations, number of hospitalisations, weight for age z-score at 12 and 18 months, number of adverse events, number of malaria episodes, number of bloodstream Salmonella typhi infections and number of gastroenteritis episodes. Participants will be followed up 3-monthly, and lung function will be assessed every 6 months. Laboratory substudies will be done to investigate the impact of azithromycin on systemic inflammation and on development of antimicrobial resistance as well as impact on the nasopharyngeal, lung and gut microbiome.

Discussion
The results of this trial will be of clinical relevance because there are no established guidelines on the treatment and management of HIV-associated CLD in children in sub-Saharan Africa, where 80% of the world’s HIV-infected children live and where HIV-associated CLD is highly prevalent.