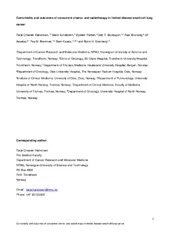 Background: Many patients with limited disease small cell lung cancer (LD SCLC) suffer from comorbidity. Not all patients with comorbidity are offered standard treatment, though there is little evidence for such a policy. The aim of this study was to investigate whether patients with comorbidity had inferior outcomes in a LD SCLC cohort.
Material and methods: We analyzed patients from a randomized study comparing two three-week schedules of thoracic radiotherapy (TRT) plus standard chemotherapy in LD SCLC. Patients were to receive four courses of cisplatin/etoposide and TRT of 45 Gy/30 fractions (twice daily) or 42 Gy/15 fractions (once daily). Responders received prophylactic cranial irradiation (PCI). Comorbidity was assessed using the Charlson Comorbidity Index (CCI), which rates conditions with increased one-year mortality.
Results: In total 157 patients were enrolled between May 2005 and January 2011. Median age was 63 years, 52% were men, 16% had performance status 2, and 72% stage III disease. Forty percent had no comorbidity; 34% had CCI-score 1; 15% CCI 2; and 11% CCI 3–5. There were no significant differences in completion rates of chemotherapy, TRT or PCI across CCI-scores; or any significant differences in the frequency of grade 3–5 toxicity (p ¼ 0.49), treatment-related deaths (p ¼ 0.36), response rates (p ¼ 0.20), progression-free survival (p ¼ 0.18) or overall survival (p ¼ 0.09) between the CCI categories.
Conclusion: Patients with comorbidity completed and tolerated chemo-radiotherapy as well as other patients. There were no significant differences in response rates, progression-free survival or overall survival – suggesting that comorbidity alone is not a reason to withhold standard therapy in LD SCLC.