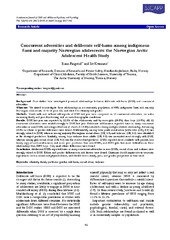 Background:
Few studies have investigated proximal relationships between deliberate self-harm (DSH) and concurrent adversities.
Objective:
We aimed to investigate these relationships in a community population of 4881 indigenous Sami and majority Norwegian adolescents, 15 to 16 years old, and related to ethnicity and gender.
Methods:
Youth with and without self-reports of DSH last year were compared on 12 concurrent adversities, on scales measuring family and peer functioning, and on sociodemographic conditions.
Results:
DSH last year was reported by 22.3% of the adolescents, and by more girls (28.8%) than boys (15.9%). All 12 concurrent adversities were related strongly to DSH last year. Deliberate self-harmers reported twice as many concurrent adversities as non-DSHs, and a large effect size (Cohen’s d = 0.80) indicated a strong multiple additive relationship, but among DSHs no ethnic or gender differences were found. Multivariately, among Sami youth sexual abuse [odds ratio (OR), 8.4] was strongly related to DSH, whereas among majority Norwegians sexual abuse (OR, 3.9) and violence (OR, 4.5) were identified as the strongest predictors. Similarly, among boys violence from adults (OR, 8.8) was associated most strongly with DSH, whereas among girls sexual abuse (OR, 4.3) was the most robust predictor. DSHs reported more conflicts with parents, less family support and involvement, and more peer problems than non-DSHs, and DHS girls had more difficulties in these relationships than DHS boys. Only small ethnic differences were found.
Conclusion:
Adolescent DSHs reported twice as many concurrent adversities as non-DSHs, sexual abuse and violence were strongly related to DSH. Ethnic and gender differences in risk factors were found. Clinicians should inquire about traumatic experiences such as sexual and physical abuses, and should have a family, peer, and gender perspective in their work.