Acute infection as a trigger for incident venous thromboembolism: Results from a population- based case- crossover study 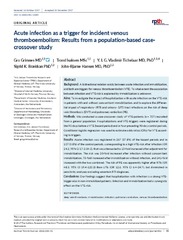 Background:
A bidirectional relation exists between acute infection and immobilization, and both are triggers for venous thromboembolism (VTE). To what extent the association between infection and VTE‐risk is explained by immobilization is unknown.
Aims:
To investigate the impact of hospitalization with acute infection on the VTE‐risk in patients with and without concomitant immobilization, and to explore the differential impact of respiratory‐ (RTI) and urinary‐ (UTI) tract infections on the risk of deep vein thrombosis (DVT) and pulmonary embolism (PE).
Methods:
We conducted a case‐crossover study of VTE‐patients (n = 707) recruited from a general population. Hospitalizations and VTE‐triggers were registered during the 90 days before a VTE (hazard period) and in four preceding 90‐day control periods. Conditional logistic regression was used to estimate odds ratios (ORs) for VTE according to triggers.
Results:
Acute infection was registered in 267 (37.8%) of the hazard periods and in 107 (3.8%) of the control periods, corresponding to a high VTE‐risk after infection (OR 24.2, 95% CI 17.2‐34.0), that was attenuated to 15‐fold increased after adjustment for immobilization. The risk was 20‐fold increased after infection without concomitant immobilization, 73‐fold increased after immobilization without infection, and 141‐fold increased with the two combined. The risk of PE was apparently higher after RTIs (OR 48.3, 95% CI 19.4‐120.0) than UTIs (OR 12.6, 95% CI 6.4‐24.7), but diminished in sensitivity analyses excluding uncertain RTI diagnoses.
Conclusions:
Our findings suggest that hospitalization with infection is a strong VTE‐trigger also in non‐immobilized patients. Infection and immobilization had a synergistic effect on the VTE‐risk.