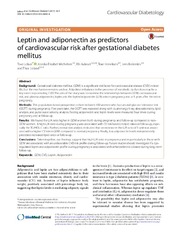 Background: Gestational diabetes mellitus (GDM) is a significant risk factor for cardiovascular disease (CVD) in later life, but the mechanism remains unclear. Adipokine imbalance in the presence of metabolic dysfunction may be a key event in promoting CVD. The aim of the study was to examine the relationships between GDM, cardiovascular risk, and plasma adiponectin, leptin and the leptin/adiponectin (L/A) ratio in pregnancy and at 5 years after the index pregnancy.

Methods: This population-based prospective cohort included 300 women who had an oral glucose tolerance test (OGTT) during pregnancy. Five years later, the OGTT was repeated along with dual-energy X-ray absorptiometry, lipid analysis, and pulse wave velocity analysis. Fasting adiponectin and leptin levels were measured four times during pregnancy and at follow-up.

Results: We found the L/A ratio higher in GDM women during both pregnancy and follow-up compared to nonGDM women. A high L/A ratio during pregnancy was associated with CV risk based on lipid ratios at follow-up, especially the TG/HDL-C ratio. Further, interaction analysis indicated that an increase in the L/A ratio of 1 unit was associated with a higher CV risk in GDM compared to normal pregnancy. Finally, low adiponectin levels independently predicted increased lipid ratios at follow-up.