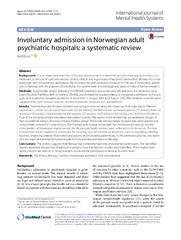 Background: It is an important objective of the psychiatric services to keep the use of involuntary procedures to a minimum, as the use of coercion involves clinical, ethical, and legal issues. It has been claimed that Norway has a relatively high rate of involuntary admissions. We reviewed the peer-reviewed literature on the use of involuntary admission in Norway, with the purpose of identifying the current state of knowledge and areas in need of further research.
Methods: A systematic review following the PRISMA statement was conducted. We searched the electronic databases PsycInfo, PubMed, Web of Science, CINAHL, and Embase for studies relating to involuntary admission to Norwegian adult psychiatric hospitals published in the period 1 January 2001 to 8 August 2016. The database searches were supplemented with manual searches of relevant journals, reference lists, and websites.
Results: Seventy-four articles were included and grouped into six categories based on their main topics: Patients’ experiences, satisfaction and perceived coercion (21 articles), the Referral and admission process (11 articles), Rates of admission (8 articles), Characteristics of the patients (17 articles), Staf attitudes (9 articles), and Outcomes (8 articles). Four of the included articles described intervention studies. Fifty-seven of the articles had a quantitative design, 16 had a qualitative design, and one a mixed-method design. There was a broad range of topics that were studied and considerable variation in study designs. The fndings were largely in line with the international literature, but the particularities of Norwegian legislation and the Norwegian health services were reflected in the literature. The four intervention studies explored interventions for reducing rates of involuntary admission, such as modifying referring routines, improving patient information procedures, and increasing patients’ say in the admission process, and represent an important avenue for future research on involuntary admission in Norway.
Conclusions: The review suggests that Norway has a relatively high rate of involuntary admissions. The identified studies represent a broad mix of topics and designs. Four intervention studies were identified. More studies with strong designs are needed to bring research on involuntary admission in Norway to a next level.