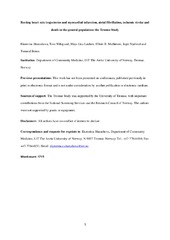 Background:
Resting heart rate (RHR) is an established risk factor for cardiovascular disease (CVD), but long-term individual RHR trajectories and their effect on CVD morbidity and mortality have not yet been described.
Methods:
This large population-based longitudinal study included 14,208 men and women aged 20 years or older, not pregnant, and not using blood pressure medications, who attended at least two of the three Tromsø Study surveys conducted between 1986 and 2001. RHR was measured using an automated Dinamap device. Participants were followed up from 2001 to 2012 with respect to myocardial infarction (MI), atrial fibrillation, ischemic stroke, CVD death, and total death. The Proc Traj statistical procedure was used to identify RHR trajectories.
Results:
Five common long-term RHR trajectories were identified: low, moderate, decreasing, increasing, and elevated. In men, an elevated RHR trajectory was independently associated with an increased risk of MI when low RHR trajectory was used as a reference (hazard ratio 1.83, 1.11-3.02). Risk of total death in men was lowest in the low RHR trajectory group and highest in the increasing and elevated RHR trajectory groups. In women, the association between RHR trajectories and MI was similar to that in men, but it was not significant.
Conclusions:
Among the five long-term RHR trajectories we identified, increasing and elevated trajectories were associated with an increased risk of MI and total death in men. Our results suggest that changes in long-term individual RHR in the general population may provide additional prognostic information.