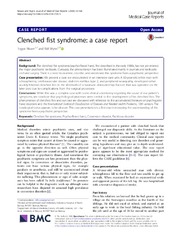 Background - The clenched fist syndrome/psycho-flexed hand, first described in the early 1980s, has not yet entered the major psychiatric textbooks. Curiously, the phenomenon has been illuminated mainly in journals and textbooks on hand surgery. There is a need to examine, describe, and understand this syndrome from a psychiatric perspective.

Case presentation - We present a case we encountered in an intensive care unit. A 60-year-old white man with schizophrenia, cerebrovascular disease, diabetes mellitus type 2, and peripheral neuropathy, developed rather acutely bilateral clenched fists in the aftermath of a traumatic dislocated hip fracture that was operated on. He later died due to complications from the surgical procedure.

Conclusions - While this was a complex case with some clinical uncertainty regarding the cause of our patient’s symptoms, we conclude that psychological processes were central to the development of his clenched fists. The phenomenon of clenched fists and our case are discussed with reference to the accumulated literature on psychogenic hand disorders and the International Statistical Classification of Diseases and Related Health Problems, 10th version. The nosological status appears to be obscure. This case presentation is a first step in increasing the understanding of this syndrome from a psychiatric perspective.