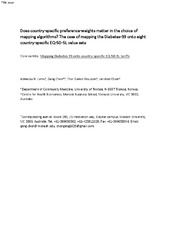 Results: The fractional regression model with loglog as a link function consistently performed best in all country-specific value sets. For instance, the NRMSE (0.1282) and NMAE (0.0914) were the lowest, while adjusted-r2 was the highest (52.5%) when the English value set was considered. Among D-39 dimensions, the energy and mobility was the only one that was consistently significant for all models.

Conclusions: The D-39 can be mapped onto the EQ-5D-5L utilities with good predictive accuracy. The fractional regression model, which is appropriate for handling bounded outcomes, outperformed other candidate methods in all country-specific value sets. However, the regression coefficients differed reflecting preference heterogeneity across countries.