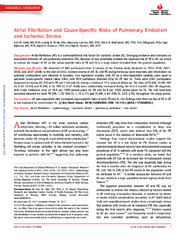 Background: Atrial fibrillation (AF) is a well‐established risk factor for ischemic stroke (IS). Emerging evidence also indicates an association between AF and pulmonary embolism (PE). Because IS may potentially mediate the observed risk of PE in AF, we aimed to assess the impact of AF on the cause‐specific risks of PE and IS in a large cohort recruited from the general population.

Conclusions: AF was associated with increased cause‐specific risks of both PE and IS. Our findings infer that the risk of PE in AF is not explained by intermediate IS.