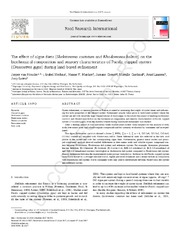 Oyster refinement, a common practice in France, is aimed at increasing the weight of oyster tissue and influencing the taste properties of the refined oysters. Refinement usually takes place in land-based systems where the oysters are fed with relatively high concentrations of microalgae. In this study the impact of feeding Skeletonema costatum and Rhodomonas baltica on the biochemical composition and sensory characteristics of Pacific cupped oysters (Crassostrea gigas) from the Eastern Scheldt during land-based refinement was studied.

After a feeding period of four and seven weeks market-sized oysters were sampled for the analysis of fatty acids, free amino acids and volatile organic compounds and for a sensory evaluation by consumers and an expert panel.