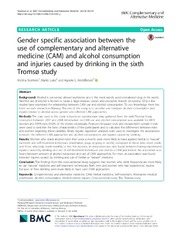 Background: Alcohol is consumed almost worldwide and is the most widely used recreational drug in the world. Harmful use of alcohol is known to cause a large disease-, social- and economic burden on society. Only a few studies have examined the relationship between CAM use and alcohol consumption. To our knowledge there has been no such research in Norway. The aim of this study is to describe and compare alcohol consumption and injuries related to alcohol across gender and different CAM approaches.

Methods: The data used in this study is based on questionnaire data gathered from the sixth Tromsø Study conducted between 2007 and 2008. Information on CAM use and alcohol consumption was available for 6819 women and 5994 men, 64.8% of the invited individuals. Pearson chi-square tests and independent sample t-tests were used to describe the basic characteristics of the participants and to calculate the differences between men and women regarding these variables. Binary logistic regression analyses were used to investigate the associations between the different CAM approaches and alcohol consumptions and injuries caused by drinking.

Results: Women who drank alcohol more than once a month were more likely to have applied herbal or “natural” medicine and self-treatment techniques (meditation, yoga, qi gong or tai-chi), compared to those who never drank, and those who only drank monthly or less. For women, an association was also found between having experienced injuries caused by drinking and use of self-treatment techniques and visit to a CAM practitioner. No association was found between amount of alcohol consumed and use of CAM approaches. For men, an association was found between injuries caused by drinking and use of herbal or “natural” medicine.

Conclusion: The findings from this cross-sectional study suggests that women who drink frequently are more likely to use “natural” medicine and self-treatment techniques. Both men and women who had experienced injuries because of their drinking were more likely to have used CAM approaches.