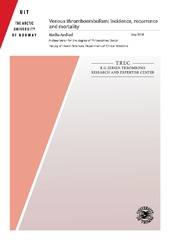 Deep vein thrombosis (DVT) and pulmonary embolism (PE), collectively referred to as venous thromboembolism (VTE), is associated with substantial morbidity and mortality. To plan and evaluate prevention and treatment strategies for VTE, understanding into the epidemiology and current magnitude of VTE is needed. The aims of this thesis were (i) to assess time-trends in the incidence of VTE in the period 1996-2012, (ii) to assess the incidence of recurrence and mortality after a first VTE, and to investigate association between (iii) hospital-related, and (iv) myocardial infarction (MI)-related first VTE and risk of VTE recurrence. All four papers in this thesis utilize the Tromsø Study, a large population-based cohort with repeated health surveys (1-7). In paper I, we followed 26 855 participants from the inclusion in Tromsø 4 (1994-95) throughout 2012, and assessed the biennial incidence rates of VTE. In Papers II-IV, patients with a first VTE in the period 1994-2012 derived from Tromsø 4 (Paper II) or Tromsø 1-6 (Papers III and IV) were followed from their first VTE until the date of recurrence, death or emigration, or the end of the study period, whichever came first. Paper IV additionally included data from the Multiple Environmental and Genetic Assessment of Risk Factors for venous thrombosis (MEGA) follow up study. We found that the overall age-adjusted incidence of VTE increased by 27% from 1996 to 2012. The observed incremental trend was largely due to an increase in the rate of PE. Furthermore, we found that the rates of recurrence and mortality remained high, particularly during the first year after the VTE event. Among patients with hospital-related VTE, the reason for hospitalisation appeared to have a great influence on recurrence risk. In traditional analysis, patients with cancer-related VTE appeared to have the highest risk of recurrence. However, when competing risk of death was taken into account, the risk estimates dropped substantially. Patients with a first VTE related to hospitalisation for medical illness had similar recurrence risk as patients with a non-hospital-related first VTE. Finally, we found that a history of MI was associated with increased risk of VTE recurrence, particularly in women.