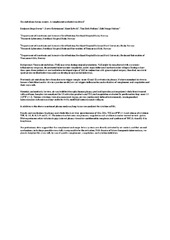 Introduction: Venous air embolism (VAE) may arise during surgical procedures. VAE might be complicated with a systemic inflammatory response, disseminated intervascular coagulation, multi-organ failure and cardiovascular collapse. During a short time-span, three patients at our institution developed signs of VAE in conjunction with gynecological surgery. One died, one developed severe cerebral infarctions and one developed myocardial infarction.

Previously, air embolisms have been shown to trigger complement C3 and C5 activation in plasma. We have examined in vitro in human whole blood and in vivo in a porcine model, how air triggers inflammation and activation of complement and coagulation and their cross-talk.