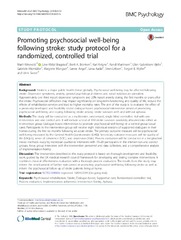 Background: Stroke is a major public health threat globally. Psychosocial well-being may be affected following stroke. Depressive symptoms, anxiety, general psychological distress and social isolation are prevalent. Approximately one third report depressive symptoms and 20% report anxiety during the first months or years after the stroke. Psychosocial difficulties may impact significantly on long-term functioning and quality of life, reduce the effects of rehabilitation services and lead to higher mortality rates. The aim of the study is to evaluate the effect of a previously developed and feasibility tested dialogue-based psychosocial intervention aimed at promoting psychosocial well-being and coping following stroke among stroke survivors with and without aphasia.

Methods: The study will be conducted as a multicenter, randomized, single blind controlled trial with one intervention and one control arm. It will include a total of 330 stroke survivors randomly allocated into either an intervention group (dialogue-based intervention to promote psychosocial well-being) or a control group (usual care). Participants in the intervention group will receive eight individual sessions of supported dialogues in their homes during the first six months following an acute stroke. The primary outcome measure will be psychosocial well-being measured by the General Health Questionnaire (GHQ). Secondary outcome measures will be quality of life (SAQoL), sense of coherence (SOC), and depression (Yale). Process evaluation will be conducted in a longitudinal mixed methods study by individual qualitative interviews with 15–20 participants in the intervention and control groups, focus group interviews with the intervention personnel and data collectors, and a comprehensive analysis of implementation fidelity.

Discussion: The intervention described in this study protocol is based on thorough development and feasibility work, guided by the UK medical research council framework for developing and testing complex interventions. It combines classical effectiveness evaluation with a thorough process evaluation. The results from this study may inform the development of further trials aimed at promoting psychosocial well-being following stroke as well as inform the psychosocial follow up of stroke patients living at home.