Telemental health in low- and middle-income countries: A systematic review 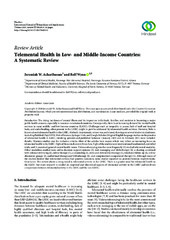 Introduction: The rising incidence of mental illness and its impact on individuals, families, and societies is becoming a major public health concern, especially in resource-constrained countries. Consequently, there is an increasing demand for mental health services in many middle- and low-income countries (LMIC). Challenges such as inequality in access, lack of staff and hospital beds, and underfunding, often present in the LMIC, might in part be addressed by telemental health services. However, little is known about telemental health in the LMIC.

Methods: A systematic review was performed, drawing on several electronic databases, including PubMed, PsycINFO, Web of Science, Springer Link, and Google Scholar. Original English language studies on the practice of telemental health in LMIC, involving patients and published between 1 January 2000 and 16 February 2017, were included.

Results: Nineteen studies met the inclusion criteria. Most of the articles were recent, which may reflect an increasing focus on telemental health in the LMIC. Eight of these studies were from Asia. Eight of the studies were interventional/randomized controlled trials, and 11 examined general mental health issues. Videoconferencing was the most frequently (6) studied telemental modality. Other modalities studied were online decision support systems (3), text messaging and bibliotherapy (1), e-chatting combined with videoconferencing (1), online therapy (2), e-counseling (1), store-and-forward technology (1), telephone follow-up (1), online discussion groups (1), audiovisual therapy and bibliotherapy (1), and computerized occupational therapy (1). Although many of the studies showed that telemental services had positive outcomes, some studies reported no postintervention improvements.