Sex Differences in the Impact of Body Mass Index on the Risk of Future Atrial Fibrillation: Insights From the Longitudinal Population-Based Tromsø Study 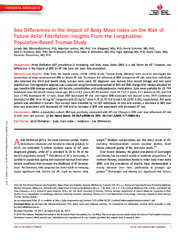 Background: Atrial fibrillation (AF) prevalence is increasing, and body mass index (BMI) is a risk factor for AF. However, sex differences in the impact of BMI on AF risk have not been fully elucidated.

Methods and Results: Data from the fourth survey (1994–1995) of the Tromsø Study (Norway) were used to investigate the association of single‐measurement BMI on future AF risk. To analyze the influence of BMI changes on AF risk, data from individuals who attended the third and fourth study surveys were used. AF diagnosis was derived from record linkage and end point adjudication. Cox regression analysis was conducted using fractional polynomials of BMI and BMI change with models adjusted for age, baseline BMI (change analyses), risk factors, comorbidities, and antihypertensive medications.

Conclusions: Within a population cohort, BMI was positively associated with AF risk. Change in BMI over time influenced AF risk in both men and women.