Practices and complications of pubic hair removal among Saudi women 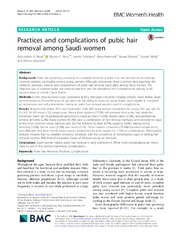 Background:
Pubic hair grooming, including the complete removal of pubic hair, has become an increasingly common practice, particularly among young women. Although widespread, there is limited data regarding the methods, products, reasons, and complications of pubic hair removal, particularly among Saudi women. The objective was to examine pubic hair removal practices and the prevalence of its complications among Saudi women living in Jeddah, Saudi Arabia.
Methods:
In this cross-sectional study conducted at King Abdulaziz University Hospital, Jeddah, Saudi Arabia, Saudi women between 16 and 60 years of age who had the ability to read and speak Arabic, were eligible to complete an anonymous and self-administered survey on pubic hair removal practices and its complications.
Results:
Between December 2015 and September 2016, 400 Saudi women completed the survey. The age was 26. 3 ± 6.9, 16–58 (mean ± SD, range) years. About three quarters (77.0%) self-removed their pubic hair, while the remainder made use of professional personnel in medical clinics (15.5%), beauty salons (5.3%), and professional services at home (2.2%). Many women (41.8%) used a combination of hair removal methods, with non-electric razor as the most common single method used (33.5%), followed by laser (8.7%), sugaring (6.0%), waxing (4.5%), trimming (2.0%), electric razor (2.0%), and cream (1.5%). Three-quarters of women (75.5%) reported complications, and although they were mostly minor injuries, treatment had to be sought for 17.9% of complications. Multivariable analyses showed that no variables remained correlated with the occurrence of complications (age of starting hair removal, income, BMI, level of education, mode of removal, advice on removal).
Conclusions:
Saudi women initiate pubic hair removal in early adolescence. While most complications are minor, close to one in five women experience complications.