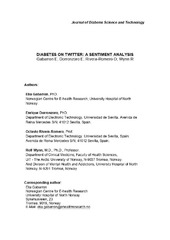 Background:
Contents published on social media have an impact on individuals and on their decision-making. Knowing the sentiment towards diabetes is fundamental to understanding the impact that such information could have on people affected with this health condition and their family members. The objective of this study is to analyze the sentiment expressed in messages on diabetes posted on Twitter.
Method:
Tweets including one of the following terms (“diabetes”, “t1d”, and/or “t2d”) were extracted for one week using the Twitter standard API. Only the text message and the number of followers of the users were extracted. The sentiment analysis was performed by using SentiStrength.
Results:
A total of 67421 tweets were automatically extracted, of those 3.7% specifically referred to T1D; and 6.8% specifically mentioned T2D. One or more emojis were included in 7.0% of the posts. Tweets specifically mentioning T2D and that did not include emojis were significantly more negative than the tweets that included emojis (-2.22 vs. -1.48), p<0.001. Tweets on T1D and that included emojis were both significantly more positive and also less negative than tweets without emojis (1.71 vs. 1.49; and -1.31 vs. -1.50 respectively), p<0.005. The number of followers had a negative association with positive sentiment strength (r = -0.023, p<0.001) and a positive association with negative sentiment (r = 0.016, p<0.001).
Conclusion:
The use of sentiment analysis techniques on social media could increase our knowledge of how social media impact people with diabetes and their families and could help to improve public health strategies.