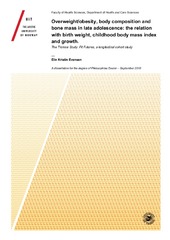 Background and aim: High prevalence of childhood overweight/obesity is a major health concern due to related immediate and long-term health problems. Early identification of children at risk is of interest, as preventing or delaying the onset of obesity may influence future health. The aim of this thesis was to study how early life factors such as birth weight, childhood body mass index (BMI, kg/m2) and growth are related to overweight/obesity, body composition and bone health in adolescence.

Methods: The Tromsø Study, Fit Futures (TFF) is a population-based cohort study with participants from Tromsø and neighbouring municipalities. Two waves were conducted in 2010-2011 (TFF1) and 2012-2013 (TFF2). Data from a representative sample of 961 adolescents (48% girls) from TFF1, of which 659 had follow-up data from TFF2, formed the basis for this thesis. Longitudinal anthropometric data were retrospectively obtained from the Medical Birth Registry of Norway and childhood health records at 2-4 and 5-7 years. Body composition (fat mass and fat-free mass) and bone mass and bone density were measured by dual-energy X-ray absorptiometry at 15-17 and 18-20 years of age. In addition, height, weight and waist circumference was obtained. Participants were classified into BMI categories: underweight, normal weight, overweight and obese, according to the International Obesity Task Force age- and sex-specific cut-off values for children 2-18 years of age.

Conclusion: We found a modest positive association between birth weight and body composition and bone mass at 15-20 years of age. Compared to birth weight, a high childhood BMI as well as childhood growth rate had a stronger influence on bone mass and bone density in adolescence. Greater BMI gain between 6.0 and 16.5 years of age were most strongly linked to adiposity and central overweight/obesity in adolescence. Early identification of children at risk of adverse levels of adiposity is possible and preventive efforts should focus on a healthy weight development. Both early childhood and adolescence are important ages for preventive efforts.