Can oxytocin augmentation modify the risk of epidural analgesia by maternal age in cesarean sections? 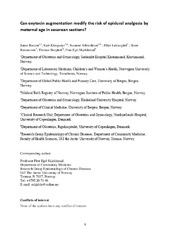 Material and methods: In all, 416 386 nulliparous women with spontaneous onset of labor, ≥37 weeks of gestation and singleton infants with a cephalic presentation during 2000–2011 from Norway and Denmark were included [Ten‐group classification system (Robson) group 1]. In this case‐control study the main exposure was maternal age; epidural analgesia, oxytocin augmentation, birthweight and time period were explanatory variables. Chi‐square test and logistic regression were used to estimate associations and interactions.

Conclusions: Oxytocin augmentation in nulliparous women with epidural analgesia is associated with a reduced risk of cesarean section in labor with spontaneous onset.

This is the peer reviewed version of the following article: Rossen, J., Klungsøyr, K., Albrechtsen, S., Løkkegård, E., Rasmussen, S., Bergholt, T. & Skjeldestad, F.E. (2018). Can oxytocin augmentation modify the risk of epidural analgesia by maternal age in cesarean sections? Acta Obstetricia et Gynecologica Scandinavica, 97(7), 872-879, which has been published in final form at https://doi.org/10.1111/aogs.13341. This article may be used for non-commercial purposes in accordance with Wiley Terms and Conditions for Use of Self-Archived Versions.