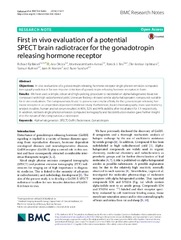 Results: We have used a simple, robust and high-yielding procedure to radiolabel an alpha-halogenated bioactive compound with high radiochemical yield. Literature findings showed similar alpha-halogenated compounds suitable for in vivo evaluations. The compound was found to possess nano molar affinity for the gonadotropin releasing hormone-receptor in a competition dependent inhibition study. Furthermore, liquid chromatography-mass spectrometry analysis in saline, human and rat serum resulted in 46%, 52% and 44% stability after incubation for 1 h respectively. In addition, rat brain single photon emission computed tomography and biodistribution studies gave further insight into the nature of the compound as a radiotracer.