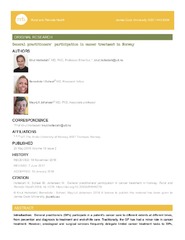 Introduction: General practitioners (GPs) participate in a patient’s cancer care to different extents at different times, from prevention and diagnosis to treatment and end-of-life care. Traditionally, the GP has had a minor role in cancer treatment. However, oncological and surgical services frequently delegate limited cancer treatment tasks to GPs, especially in rural areas far from hospitals. The aim of this study was to explore the extent of GPs’ participation in cancer treatment in Norway.

Methods: This study was an observational questionnaire study. In 2007, the chief municipal medical officer in all 93 municipalities in North Norway and a 25% random sample (85 municipalities) in South Norway was asked to identify up to five GPs who had recently participated in local treatment of cancer patients, and to forward a patient questionnaire to them.

Results: Seventy-eight GPs in 49 municipalities returned completed questionnaires for 118 patients, most of them with progressive disease and living in rural areas. All the GPs reported substantial participation in therapeutic tasks for this select group of patients. Not counting palliative treatment, 64% of the GPs participated in cancer treatment either directly, or indirectly through referrals. Twenty patients received chemotherapy; they belonged to no particular diagnostic category. Eighty-eight percent of the GPs prescribed some kind of palliative medicine, such as analgesic, antiemetic, anxiolytic or antidepressant. Morphine was prescribed equally often by GPs and hospitals. Eighty-one percent of GPs reported having had a thorough conversation with the patient about the patient’s condition and circumstances.

Conclusion: In this group of GPs, participation rates were high for most of the therapeutic and communicative tasks suggested in the questionnaire. GP participation is feasible not only in palliative care, but also in some aspects of oncological treatment and in clinical follow-up. Communication with both patient and hospital seemed good in this local setting. GPs are important helpers for some cancer patients.