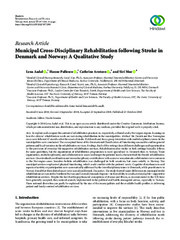 Aim: To explore and compare the content of rehabilitation practices in, respectively, a Danish and a Norwegian region, focusing on how the citizens’ rehabilitation needs are met during rehabilitation in the municipalities.

Method: Six Danish and five Norwegian cases were followed 12 months after the onset of stroke. Field work and focus group interviews with multidisciplinary teams in the municipalities were conducted. The conceptual frame of the International Classification of Functioning was used to outline general patterns and local variation in the rehabilitation services.

Findings: Each of the settings faces different challenges and opportunities in the provision of everyday life-supportive rehabilitation services. Rehabilitation after stroke in both settings basically follows the same guidelines, but the organization of rehabilitation programmes is more specialized in Denmark than in Norway. Team organization, multidisciplinarity, and collaboration to assess and target the patients’ needs characterized the Danish rehabilitation services. Decentralized coordination and monodisciplinary contributions with scarce or unsystematic collaboration were common in the Norwegian cases. Seamless holistic rehabilitation was challenged in both countries, but more notably in Norway. The municipal services emphasized physical functioning, which could conflict with the patients’ needs. Cognitive disturbances to and aspects of activity or participation were systematically addressed by the interdisciplinary teams in Denmark, while practitioners in Norway found that these disturbances were scarcely addressed.

Discussion: The study showed major differences in municipal stroke rehabilitation services in the Northern Norway and Central Denmark Regions—in their ability to conduct everyday life—supportive rehabilitation services. Despite the fact that biopsychosocial conceptions of disease and illness, as recommended in the ICF, have been generally accepted, they seemed scarcely implemented in the political and health managerial arenas, especially in Norway. These national diversities can partly be explained by the size of the municipalities and the available health profiles in delivering patient and family-centred rehabilitation services.