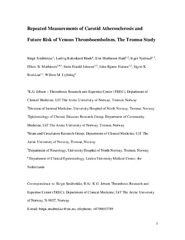 Background: Whether a relationship between atherosclerosis and subsequent venous thromboembolism (VTE) exists is controversial.

Objective: To investigate the association between carotid atherosclerosis and VTE by using repeated measurements of intima media thickness (IMT) and total plaque area (TPA) in participants recruited from the general population.

Methods: Participants were recruited from the fourth (1994–1995), fifth (2001–2002) and sixth (2007–2008) surveys of the Tromsø Study. In total, 10 426 participants attended, for whom measurements of carotid IMT and TPA and potential confounders were updated at each available survey. Time‐varying Cox regression models were used to calculate hazard ratios (HRs) of VTE across various levels of IMT and TPA adjusted for age, sex, and body mass index.

Results: There were 368 incident VTE events during a median follow‐up of 10.8 years. Participants with increasing IMT were, on average, older and had a less favorable cardiovascular risk profile. There was no association between tertiles of increasing TPA and the risk of VTE in the time‐varying model, and increasing IMT was not associated with an increased risk of VTE (HR 0.96, 95% confidence interval [CI] 0.86–1.07). Neither plaque formation nor plaque progression was associated with the risk of VTE (respectively: HR 1.00, 95% CI 0.98–1.02; and HR 0.96, 95% CI 0.84–1.11).

Conclusion: Carotid IMT and TPA were not associated with an increased risk of VTE in time‐varying analyses. Furthermore, there was no association between plaque initiation or plaque progression and subsequent VTE.

This is the peer reviewed version of the following article: Småbrekke, B., Rinde, L.B.R., Mathisen Hald, E.M., Njølstad, I., Mathiesen, E.B., Johnsen, S.H., ... Lijfering, W.M. (2017). Repeated measurements of carotid atherosclerosis and future risk of venous thromboembolism: the Tromsø Study. Journal of Thrombosis and Haemostasis, 16(12), 2344-2351, which has been published in final form at https://doi.org/10.1111/jth.13858. This article may be used for non-commercial purposes in accordance with Wiley Terms and Conditions for Use of Self-Archived Versions.