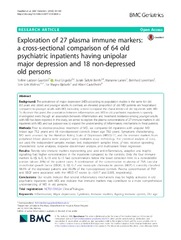 Background: The prevalence of major depression (MD) according to population studies is the same for old (65 years and older) and younger adults. In contrast, an elevated proportion of old MD patients are hospitalized compared to younger adults with MD, indicating a need to expand the characteristics of old inpatients with MD. To illustrate this point, the association between inflammation and MD in old psychiatric inpatients is sparsely investigated even though an association between inflammation and treatment resistance among younger adults with MD has been reported. In this study, we aimed to explore the plasma concentrations of 27 immune markers in old inpatients with MD, and our purpose was to expand the understanding of inflammatory mechanisms in these patients.

Results: Twenty-two immune markers representing pro- and anti-inflammatory, adaptive and trophic signalling had higher concentrations in the inpatients compared to the controls. Only the four immune markers IL-1β, IL-5, IL-10 and IL-15 had concentrations below the lower detection limit in a considerable portion (above 20%) of the patient cases. A combination of the concentration in plasma of TNF, vascular endothelial growth factor (VEGF), IL-1β, IL-7 and monocyte chemotactic protein (MCP)-1, correctly classified 98.4% of the depressed patients and 83.3% of the non-depressed controls. Plasma concentration of TNF and VEGF were associated with the HRSD-17 scores (p = 0.017 and 0.005, respectively).

Conclusions: Our results indicate that several inflammatory mechanisms may be highly activated in old psychiatric inpatients with MD, and indicate that immune markers may contribute to a more comprehensive understanding of MD in old persons.