High HIV and active tuberculosis prevalence and increased mortality risk in adults with symptoms of TB: a systematic review and meta-analyses 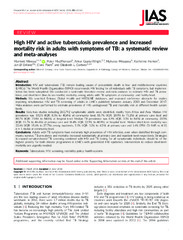 Introduction: HIV and tuberculosis (TB) remain leading causes of preventable death in low- and middle-income countries(LMICs). The World Health Organization (WHO) recommends HIV testing for all individuals with TB symptoms, but implementation has been suboptimal. We conducted a systematic literature review and meta-analyses to estimate HIV and TB prevalence, and short-term (two to six months) mortality, among adults with TB symptoms at community- and facility level.

Conclusions: Adults with TB symptoms have extremely high prevalence of HIV infection, even when identified through community surveys. TB prevalence and mortality increased substantially at primary care and inpatient level respectively. Strategies to expand symptom-based TB screening combined with HIV and TB testing for all symptomatic individuals should be of the highest priority for both disease programmes in LMICs with generalized HIV epidemics. Interventions to reduce short-term mortality are urgently needed.