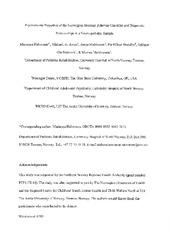 Introduction: Although the Aberrant Behavior Checklist (ABC) is one of the most widely used behavioral rating scales among people with developmental disabilities, very few studies have examined the factor structure of the non-English versions.

Methods: The construct validity of the Norwegian ABC was examined in a clinical sample of children and adolescents with neurological and neurodevelopmental disorders (N= 339). Diagnoses were obtained from direct interdisciplinary assessments in our neuropediatric clinics.

Results: In an exploratory factor analysis, 46 of the 58 items (79%) loaded most heavily on four of the five original factors in the English version. Confirmatory factor analysis revealed less-than-optimal fit indices for the five-factor solution. Internal consistency was adequate to excellent for all subscales (α range = .76–.95). The ABC showed meaningful overlap and differentiation with the Strengths and Difficulties Questionnaire, the Behavior Rating Inventory of Executive Function, the Vineland Adaptive Behavior Scales, and full scale IQ. There were positive correlations between several of the ABC subscales and diagnoses of attention deficit/hyperactivity disorder, autism spectrum disorder, oppositional defiant disorder, and emotional disorder.

Conclusion: Satisfactory psychometric properties were found for the ABC, with the exception of the Inappropriate Speech factor, in a mixed sample of higher functioning children and adolescents with neurodevelopmental and neurological disorders.