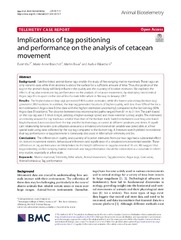 Background - Satellite-linked animal-borne tags enable the study of free-ranging marine mammals. These tags can only transmit data while their antenna is above the surface for a sufficient amount of time. Thus, the position of the tag on the animal’s body will likely influence the quality and the quantity of location estimates. We explored the effects of tag placement and tag performance on the analysis of cetacean movement, by deploying two identical Argos tags 33 cm apart on the dorsal fin of a male killer whale in Norway in January 2017.

Results - The highest placed (top tag) generated 540 location estimates, while the lowest placed tag (bottom tag) generated 245 locations. In addition, the top tag generated locations of higher quality, with less than 50% of the location estimates in Argos class B (the class with the highest estimated uncertainty), compared to the bottom tag (90% Argos class B locations). The distance between two reconstructed paths ranged from 81 m to 31 km. The path based on the top tag was 1.5 times longer, yielding a higher average speed and more extreme turning angles. The estimated uncertainty around the top track was smaller than that of the bottom track. Switches between searching and travelling behaviour, based on data from the top and the bottom tags, occurred at different positions and times. A significant relationship between core utilization areas and a simulated environmental variable was detectable at a finer spatial scale using data collected by the top tag compared to the bottom tag. A literature search yielded no evidence that tag performance or tag placement is commonly discussed in killer whale telemetry articles.

Conclusions - The differences in quality and quantity of location estimates from our two tags had a substantial effect on derived movement metrics, behavioural inferences and significance of a simulated environmental variable. These differences in tag performance are likely linked to the height difference in tag placement of 33 cm. We suggest that tag positioning on free-ranging marine mammals and tag performance should be considered as a covariate in telemetry studies, especially at a fine scale.