Suicidal ideation in relation to disordered eating, body size and weight perception: a cross-sectional study of a Norwegian adolescent population - the HUNT Study 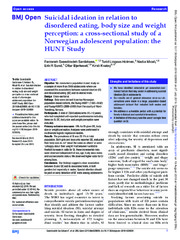 Objective - We conducted a population-based study on a sample of more than 7000 adolescents where we examined the associations between suicidal ideation (SI) and disordered eating (DE) and its related traits.

Participants - A total of 7268 adolescents (15–19 years) who had completed self-reported questionnaires including items on SI, DE, body size and weight perception were included.

Results - The prevalence of SI was 23.1% in total population. Both girls and boys who reported DE, evaluated their body size as not ‘about the same as others’ or were ‘unhappy about their weight’ had between twofold to fivefold increase in odds for SI; these incremental risks were observed independent of sex, age, body mass index and socioeconomic status. We observed higher odds for SI among boys.

Conclusions - Our findings suggest a clear association between SI and DE and its associated traits, in both genders but especially in males. Special attention should be paid on early detection of DE traits among adolescents.