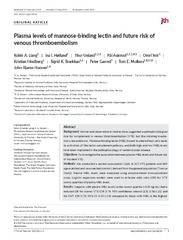 Background - Animal and observational studies have suggested a pathophysiological role for complement in venous thromboembolism (VTE), but the initiating mechanisms are unknown. Mannose‐binding lectin (MBL) bound to altered host cells leads to activation of the lectin complement pathway, and both high and low MBL levels have been implicated in the pathophysiology of cardiovascular disease.

Objectives - To investigate the association between plasma MBL levels and future risk of incident VTE.

Conclusions - Our findings suggest that low plasma MBL levels are associated with reduced risk of VTE, and DVT in particular.