Low-grade impairments in cognitive and kidney function in a healthy middle-aged general population: a cross-sectional study 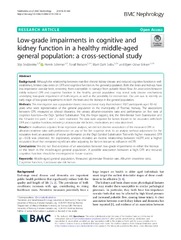 Methods - This investigation was a population-based cross-sectional study that included 1627 participants aged 50–62 years who were representative of the general population in the municipality of Tromsø, Norway. The associations between GFR, measured as iohexol clearance, the urinary albumin-creatinine ratio and performance on five tests of cognitive function—the Digit Symbol Substitution Test, the finger tapping test, the Mini-Mental State Examination and the 12-word test parts 1 and 2 – were examined. The data were adjusted for factors known to be associated with both GFR and cognitive function, including cardiovascular risk factors, medications and education level.

Results - In multivariate adjusted linear regression analyses, we did not observe associations of the measured GFR or albumin-creatinine ratio with performance on any of the five cognitive tests. In an analysis without adjustment for the education level, an association of worse performance on the Digit Symbol Substitution Test with higher measured GFR (p = 0.03) was observed. An exploratory analysis revealed an inverse relationship between mGFR and a higher education level that remained significant after adjusting for factors known to influence mGFR.

Conclusions - We did not find evidence of an association between low-grade impairments in either the kidneys or the brain in the middle-aged general population. A possible association between a high GFR and reduced cognitive function should be investigated in future studies.