Grip strength in men and women aged 50–79 years is associated with non-vertebral osteoporotic fracture during 15 years follow-up: The Tromsø Study 1994–1995 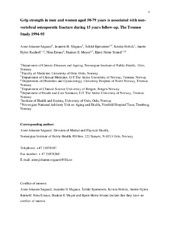 Summary - In 50–79-year-olds who participated in the Tromsø Study (1994–1995), the risk of non-vertebral osteoporotic fractures during 15 years follow-up increased by 22% in men and 9% in women per 1 SD lower grip strength. The strongest association was observed in men aged 50–64 years.

Introduction - We aimed to explore whether low grip strength was associated with increased risk of non-vertebral osteoporotic fracture in the population-based Tromsø Study 1994–1995.

Methods - Grip strength (bar) was measured by a Martin Vigorimeter and fractures were retrieved from the X-ray archives at the University Hospital of North Norway between 1994 and 2010. At baseline, weight and height were measured, whereas information on the other covariates were obtained through self-reported questionnaires. Cox regression was used to estimate the hazard ratio (HR) of fracture in age- and gender-specific quintiles of grip-strength, and per 1 SD lower grip strength. Similar analyses were done solely for hip fractures. Adjustments were made for age, height, body mass index (BMI), marital status, education, smoking, physical activity, use of alcohol, self-perceived health, and self-reported diseases.

Conclusions - The risk of non-vertebral osteoporotic fracture increased with declining grip-strength in both genders, particularly in men aged 50–64 years.