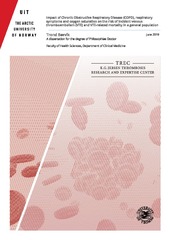 Venous thromboembolism (VTE) is a collective term for pulmonary embolism (PE) and deep vein thrombosis (DVT). Chronic Obstructive Pulmonary Disease (COPD) is described as a moderate risk factor for VTE, but the association has so far been scarcely examined. The aims of this thesis were to I) investigate the impact of COPD on the risk of incident VTE and the risk of mortality in COPD-patients with VTE; II) examine the impact of hypoxia and respiratory symptoms (cough, phlegm and dyspnea) on the risk of VTE in subjects with and without COPD; and III) investigate the impact of COPD on mortality risk in VTE patients. Study participants were recruited from the fifth and sixth surveys of the Tromsø-study conducted in 2001-02 and 2007-08, respectively. Using a cohort design, >8600 participants were followed from the date of inclusion until 2011 (paper I) or 2016 (Paper II) and all VTEs occurring during follow-up were recorded. Information on mortality was derived from the national population registry.

We found no linear increase in the risk of VTE across stages of COPD. However, there was a threshold effect, where patients with severe COPD (stage III/IV) had a 1.6 fold higher risk of overall VTE, and a 2-fold higher risk of secondary VTE, compared to subjects without COPD. VTE was also a strong predictor of all-cause mortality in all stages of COPD. Both lowered oxygen saturation and respiratory symptoms were associated with an increased risk of VTE, and the combination of COPD and respiratory impairments yielded an additive increase in the VTE risk. In patients with VTE, concomitant COPD was associated with a 2-fold higher risk of mortality, and the risk of death increased with the severity of COPD.

Our findings suggest that both severe COPD, lowered oxygen saturation and respiratory symptoms are associated with incident VTE. Moreover, our studies showed that VTE in combination with COPD is associated with substantially increased risk of mortality.