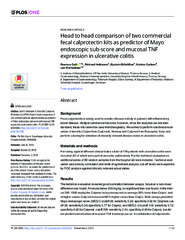 Background - Fecal calprotectin is widely used to monitor disease activity in patients with inflammatory bowel disease. Multiple commercial kits exist, however, since the analyses are not standardized, these kits cannot be used interchangeably. We aimed to perform a technical evaluation of two kits (Calpro from Calprolab, Norway and Calprest from Eurospital, Italy) and perform a tuning for detection of clinically relevant disease states in ulcerative colitis.

Materials and methods - For tuning against different clinical states a total of 116 patients with ulcerative colitis were recruited (67 of which were part of an earlier publication). For the technical evaluation an additional series of 80 random samples from the hospital lab were included. Technical evaluation was done by correlation and limits of agreement analysis; cut-off levels were explored by ROC analysis against clinically relevant actual states.

Conclusion - The Calpro and Calprest assays correlated well, but subtle differences were found, underlining the need for kit-specific cut-off values. Both kits were most precise in predicting active inflammation (MES 2–3), but less so for prediction of mucosal healing (MES 0) and normalization of mucosal TNF gene expression.