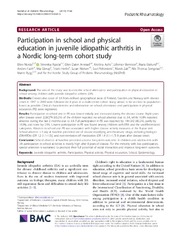 Background - The aim of the study was to describe school attendance and participation in physical education in school among children with juvenile idiopathic arthritis (JIA).

Methods - Consecutive cases of JIA from defined geographical areas of Finland, Sweden and Norway with disease onset in 1997 to 2000 were followed for 8 years in a multi-center cohort study, aimed to be as close to population-based as possible. Clinical characteristics and information on school attendance and participation in physical education (PE) were registered.

Results - Participation in school and in PE was lowest initially and increased during the disease course. Eight years after disease onset 228/274 (83.2%) of the children reported no school absence due to JIA, while 16.8% reported absence during the last 2 months due to JIA. Full participation in PE was reported by 194/242 (80.2%), partly by 16.9%, and none by 2.9%. Lowest participation in PE was found among children with ERA and the undifferentiated categories. Absence in school and PE was associated with higher disease activity measures at the 8-year visit. School absence > 1 day at baseline predicted use of disease-modifying anti-rheumatic drugs, including biologics (DMARDs) (OR 1.2 (1.1–1.5)), and non-remission off medication (OR 1.4 (1.1–1.7) 8 years after disease onset.

Conclusion - School absence at baseline predicted adverse long-term outcome. In children and adolescents with JIA participation in school activities is mostly high after 8 years of disease. For the minority with low participation, special attention is warranted to promote their full potential of social interaction and improve long-term outcome.