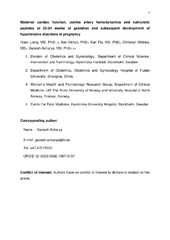 Introduction - Maternal cardiac dysfunction as well as abnormal uterine artery (UtA) Doppler are associated with hypertensive disorders of pregnancy (HDP), but their relation is unclear. We investigated the correlation between maternal cardiac function, UtA hemodynamics and natriuretic peptides, and explored differences between women who subsequently developed HDP and those who did not.

Conclusions - ProANP correlated with cardiac output and cardiac work, Nt‐proBNP with indices of cardiac contractility, and CNP with UtA blood flow and resistance. None of these natriuretic peptides measured at 22‐24 weeks of gestation reflected cardiac preload reserve or predicted development of HDP.

This is the peer reviewed version of the following article: Liang, H., Vårtun, Å., Flo, K., Widnes, C. & Acharya, G. (2019). Maternal cardiac function, uterine artery hemodynamics and natriuretic peptides at 22-24 weeks of gestation and subsequent development of hypertensive disorders of pregnancy. Acta Obstetricia et Gynecologica Scandinavica, 98(4), 507-514, which has been published in final form at https://doi.org/10.1111/aogs.13525. This article may be used for non-commercial purposes in accordance with Wiley Terms and Conditions for Use of Self-Archived Versions.

Wiley
Nordic Federation of Societies of Obstetrics and Gynecology