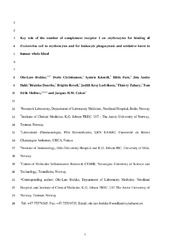 Aim - To study the role of complement receptor 1 (CR1) for binding of Escherichia coli (E. coli) to erythrocytes, for leukocyte phagocytosis, oxidative burst and complement activation in human whole blood from a CR1 deficient (CR1D) patient and healthy controls with low, medium and high CR1 numbers.

Results - Approximately 85% of E. coli bound to erythrocytes after 15 min incubation in donor blood with high and medium CR1 numbers, 50% in the person with low CR1 numbers and virtually no detectable binding in the CR1D (r2 = 0.87, P < 0.0007). The number of free bacteria in plasma was inversely related to erythrocyte CR1 numbers (r2 = 0.98, P < 0.0001). E. coli-induced phagocytosis and oxidative burst were significantly enhanced by the anti-CR1 mAb 3D9 and in the CR1D and the donor with low CR1 numbers. E. coli-induced complement activation in plasma, C3bc and C4bc deposition on erythrocytes, and bacterial growth were similar in all four cases.